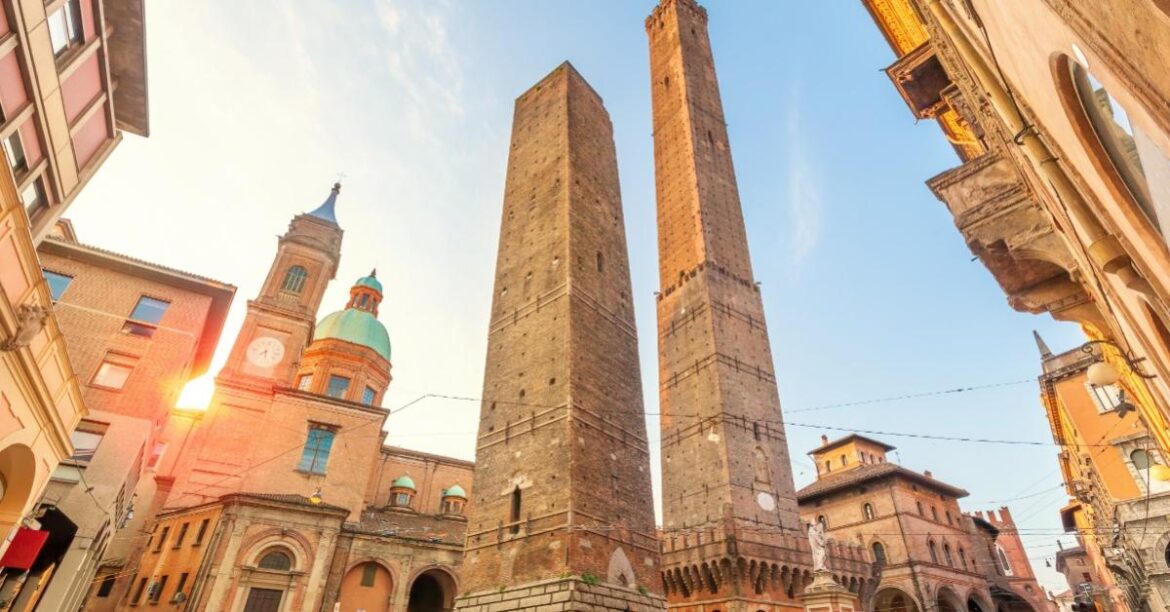 The Italian City-Republics Were the Manhattan of the Twelfth Century

The beautiful Italian town of Bologna is famous for its vast historical center full of medieval buildings, palaces, churches, and elegant porticoes. The visitor is left speechless by the remaining twenty-two towers out of about 180 erected between the twelfth and thirteenth centuries. The Asinelli tower, the tallest of them at 97 meters, compares to the standard height of a modern skyscraper. It is truly amazing that in the early Middle Ages, Bologna’s spectacular towers made it look very much like Manhattan today.

Such towers were built in many northern Italian towns by rich families for defensive purposes when rivalries between oligarchic clans turned deadly. They were also a status symbol, and their construction, which was quite onerous, bears witness to the economic miracle that took place in that period. Starting from the fourteenth century, many towers were demolished, and others simply collapsed. The rise and fall of the towers illustrate very well the early Middle Ages experiment of independent Italian city-republics with capitalist and democratic institutions.

Breaking from the Oppressive Feudal System

The feudal economic system was rigidly based on people’s predetermined status in the feudal hierarchy in terms of obligations and rewards. The majority of the population was engaged in subsistence agriculture around self-sufficient manors, and most of the agricultural workers were bound to the land in a system of serfdom. Wages and prices were set by the political and religious authorities or by towns’ guilds, which restricted free competition. There was limited room for entrepreneurship, and economic growth was dismal.

Starting from the eleventh century, cracks opened in the feudal system, and many European towns started to develop as major centers of trade and manufacturing. The so-called free cities or independent city-states purchased charters granting various degrees of self-government from their sovereigns through negotiations, which sometimes implied violent uprisings.

Independent cities prospered from free exchanges and greater labor division, gradually lifting the rural economy too. The free towns also became directly involved in the liberation of serfs in the surrounding countryside. They began to dominate economically and militarily.

Ralph Raico and Robert Higgs underlined several factors contributing to the emergence of merchant capitalism in Europe. Unlike other great civilizations, especially the Chinese, Indian, and Islamic ones, Europe was decentralized into a system of divided powers and jurisdictions, such as kingdoms, principalities, city-states, and ecclesiastical domains. The constant rivalry among kings, feudal nobility, and the powerful Catholic church reduced the rulers’ capacity to oppose the struggle for the freedom of the townspeople.

Christianity and Christian philosophers mitigated serfdom and justified the legitimacy of resistance to unjust rulers, recognizing the moral superiority of natural over positive law. In addition, the Italian city-states benefitted from the rugged terrain of the Alps, which prevented the Holy Roman Empire from defeating them militarily.

Sovereigns were limited by charters, such as the Magna Carta, granting political and economic rights to their subjects and strengthening the rule of law. Already by the twelfth century, many communes had issued elaborate legislative codes protecting property rights and free trade. This stimulated capital accumulation and technological progress, unlike in imperial China, where a feudal bureaucracy suppressed entrepreneurship and the use of inventions in market production. Florence and Venice also played a crucial innovative role in banking and in the development of instruments for trade and finance, such as double-entry bookkeeping, bills of exchange, insurance, and commercial law and courts.

The advance of merchant capitalism in northern Italy led to a swift increase in population, which doubled from the eleventh to the thirteenth centuries. A substantial migration from the countryside led to the emergence of big cities of over one hundred thousand inhabitants such as Venice, Florence, and Milan. Northern Italy was the most urbanized and literate society in the world at that time and the economic capital of Western Europe. The maritime republics Venice and Genoa became international trading hubs and acquired vast naval empires in the Mediterranean and Black seas. Architecture, town planning, arts, culture, science, and education also flourished.

Checks on Oligarchic and Absolute Power

Major advances in terms of economic and political freedom needed appropriate governance systems. Early democratic forms of government emerged: the so-called “communes” based on the broad political participation of the towns’ citizens and in particular of the rising middle class.

Initially, the communes struggled to replace the earlier lay lord and episcopal authorities by designating some “law-worthy men” (boni homines) to perform various jobs. With time, the boni homines formed a permanent executive called the “consulate.” The consuls were elected either directly by the town’s general assembly of the people or indirectly by electors from the various strata of the population, including non-nobles. The main purpose in the selection of the consuls was to “hinder the domination of city politics by cliques.”

In smaller towns, it was feasible to hold meetings with all the citizens. In bigger towns, a great council counting four hundred to four thousand members acted like a parliament (arengo), sometimes helped by a smaller council of around forty members that directly supervised the work of the executive. Given the relatively small size of a town’s population, a large share of it, including the majority of the wealthy people, was directly involved in decision-making. A lot of administrative duties were undertaken by the citizens themselves in their free time, strengthening the civic spirit and political accountability, as well as reducing corruption.

Many cities were de facto governed by oligarchies of the rich families. As the communes succeeded in asserting their external autonomy, it became harder and harder to prevent internal conflicts between oligarchs (vendettas). To mitigate this, many communes hired an independent head consul (podesta) from outside of the town to serve as chief justice with police powers. In addition, common people organized themselves into associations called “societas populi” or “popolani.” Their members were “merchants, craftsmen and men between wealth and poverty,” broadly equivalent to today’s middle class. Manual workers and people in very humble circumstances, who could have been easily bought or intimidated by the nobles, were not accepted into these political groups. In many cities, the “popolani” could raise an infantry of a thousand to two thousand men against the nobles. This institution played an important role in checking violent vendettas and preventing the commune from being captured by vested interests.

Other private protection associations emerged as well. “Consorzeria” was an alliance for private defense, both in terms of mutual military assistance and judicial support, which was accessible to nobles and common people alike. It was very useful in dealing with the violent quarrels of communal life and settling disputes among their own members. Its main features resemble those of private protection agencies that could operate in a libertarian society, according to Murray Rothbard.

Eventually internal conflicts among oligarchs and external warfare brought incessant military and fiscal crises that undermined the democratic forms of government. The communes turned for protection to a strong man, either a local lord or a foreign king, granting them temporary special powers. In many cases, the special powers were prolonged indefinitely, leading to a regime of a single ruler (signoria).

Other communes became heavily indebted to lords and were subdued through economic means or were taken over by nobles leading mercenary troops (condottieri). By the end of the fourteenth century, most cities became “signorie.” Republican regimes survived longer in very few city-states, most notably in Venice, which was de facto ruled by numerous patrician families forming the Great Council.

In principle, “signoria” did not usher in tyrannies, but the nobility got the upper hand again in suppressing the common people. Although the difference between a commune under a tight oligarchy and a “signoria” proper was not always that large, a considerable expansion in the power of governments took place from the fourteenth century on. The productive wealth was increasingly diverted into bureaucratic institutions, military expenditures, and the pockets of the oligarchs. The fiscal burden increased through new and more onerous taxes, forced loans on wealthy citizens (prestanze), and a surge in state debts.

The successful break of Italian city-republics from feudalism illustrates the crucial role played by economic freedom and participatory democracy in fostering prosperity and human development. Key contributors were the decentralized powers in Europe and the people’s struggle to gain and preserve political and economic liberties through active civic and political participation.

But, within two centuries, single ruling families rose to power and captured the democratic and market institutions. This is a useful lesson of how unchecked domestic violence, militarism, and external wars can lead to the aggrandizement of the government and loss of freedom.