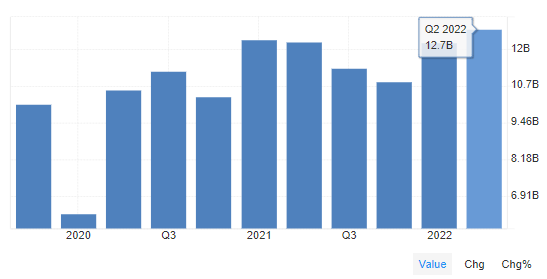 Sportswear retailer #Nike is expected to report earnings on Tuesday, (20/12) after the market closes. The report is for the fiscal quarter ending November 2022. In its last report on September 29, the company reported EPS of $0.93, beating analyst consensus estimates of $0.91. NIKE has a net margin of 11.96% and a return on equity of 37.08%. The company had revenue of $12.70 billion for the quarter, compared with a consensus estimate of $12.28 billion. During the same quarter the previous year, the company earned $1.16 per share. The company’s revenue for the quarter was up 3.7% compared to the same quarter last year.

This time, #Nike is projected to report a decline in profit, with consensus calling for a drop of around 19% year-over-year, nearly matching last quarter’s decline and gross margin also expected to contract for the third straight period. The company’s earnings are likely to have been hit by the ongoing weakness in China and increased promotions due to oversupply. With consumers shifting away from buying clothes, Nike and its rivals are trying to find ways to reduce warehouse overstocks that have piled up after supply chain bottlenecks.

China accounted for about 13% of Nike’s sales in the first fiscal quarter of 2022, with footwear accounting for $1.2 billion of the company’s $1.66 billion in China revenue. Even though clothing sales fell in November, footwear sales could be the only ones making a high contribution. Analysts will be listening to comments on sales in China, pre-holiday readings and consumer sentiment, as US retail sales fell the most in nearly a year in November, despite some of the year’s biggest shopping days.

The company has benefited from the Consumer Direct Acceleration strategy, along with strong demand, attractive products, and strong performance in digital and DTC businesses. Supply chain constraints, continued weakness in China, and higher costs are expected to weigh on the results from the quarter to be reported.

Zacks Consensus Estimates for second-quarter fiscal revenue were pegged at $12.6 billion, representing 11% growth over the figure reported in the prior-year quarter. The Zacks Consensus Estimate for the company’s second-quarter fiscal earnings was pegged at 65 cents per share, indicating a 21.7% drop from last year’s reported figure. Earnings forecasts for the fiscal second quarter have fallen one cent in the last seven days. The company’s estimated second-quarter total fiscal revenue increased 10.5% year-over-year to $12,547 million and the bottom line fell 18.6% to 68 cents per share. Zack gave a rating of 3 (hold) for Nike.

Technically, the rebound from $82.20 was eclipsed by the 200-day EMA and only registered gains at $116.37 below 38.2%FR (from the drawdown of $179.10 and $82.20 peaks), although the recent advances in October and November have boosted market optimism, as they managed to break through descending trendline. The RSI clearly indicates a change in direction from the overbought point and the MACD signal crossing the buy zone could indicate weakness in Nike’s value in the short term.

The price bias has been relatively stable ahead of the earnings report, with a continued slide could test the 50.0% retracement level slightly below the $99.50 support and a disappointing report could take the downside to test 61.8%FR. While on the upside, a move above the $116.37 resistance would confirm a continuation of the $82.20 rebound to several resistance levels such as $118.46 and $123.77.

A number of other research analysts have recently weighed in on the value of Nike’s stock. Credit Suisse Group set a target price of $110.00 in a report on Monday, October 17th. Deutsche Bank Aktiengesellschaft increased their target price on NIKE stock from $99.00 to $126.00. Stifel Nicolaus lowered their target price on NIKE stock from $130.00 to $110.00 and assigned a “buy” rating to the stock in a September 30 research report. HSBC slashed its NIKE share price target to $100.00 in a research report on Thursday, October 20. Argusslashed NIKE’s rating from a “buy” to a “hold” rating in a report on Monday, October 3. Thirteen analysts have rated the stock as hold and twenty have given the company’s stock a buy rating. According to data from MarketBeat,the company has a “Moderate Buy” consensus rating and a consensus target price of $119.29.