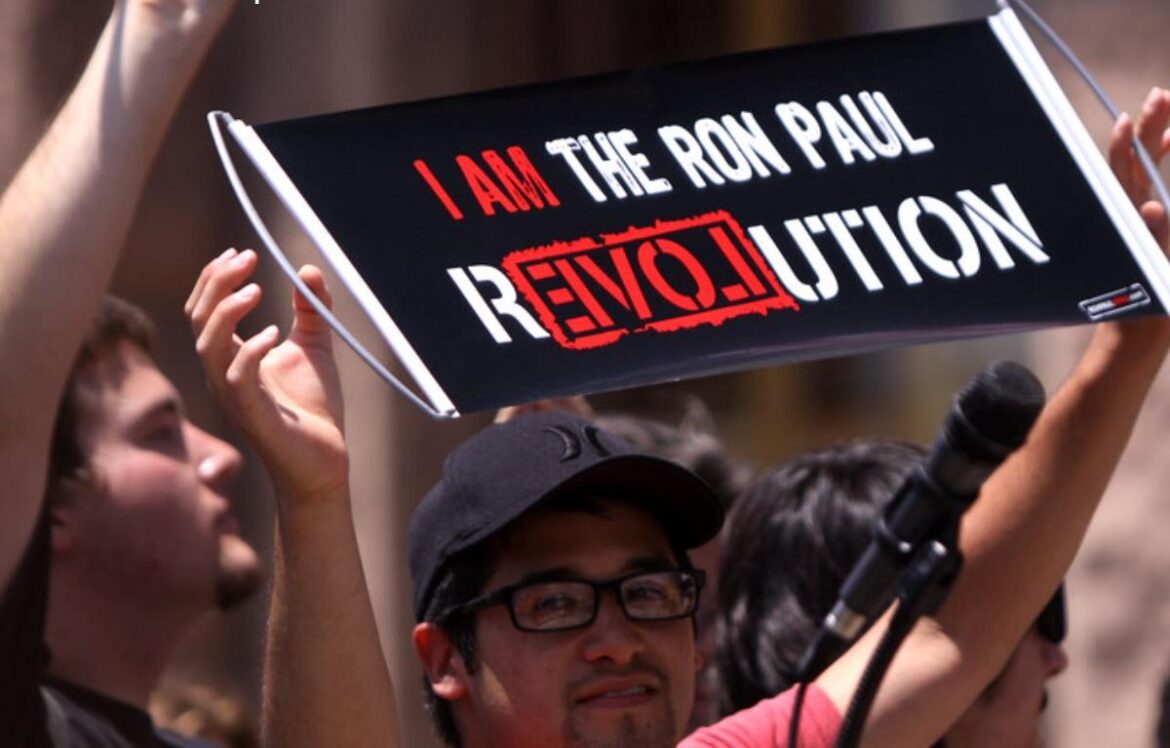 December 16, 2022, is the fifteenth anniversary of the modern Tea Party. That fact will come as a surprise to many readers who take the mainstream narrative about the Tea Party at face value. The mainstream account begins on February 19, 2009, when Rick Santelli, live on CNBC from the trading floor of the Chicago Mercantile Exchange (CME), declared a rebellion against “socialism” one month into the Obama administration.

If you’re already sensing something amiss, that’s understandable. An editor at establishment NBC lighting the fire of an anti-establishment rebellion? An uprising over mere proposed Obama bailouts of mortgage holders coming four months after silence over (if not a defense of) George W. Bush’s $700 billion TARP bailout of Wall Street? If this mainstream narrative seems fishy the more you delve into it, that is because it is.

What really happened 15 years ago and how was the Tea Party transformed from a libertarian grass-roots movement to today’s almost completely dead establishment version? What are some of the lessons that can be learned?

The ground-zero event that founded the Tea Party was the registration of the domain TeaParty07.com on October 24, 2007, by supporters of Ron Paul’s first presidential campaign. Here is archive.org’s snapshot of the site on November 13, 2007 displaying the famous original curled flyer:

Twelve days after the site registration came Guy Fawkes Night on November 5, 2007, when Paul supporters set off the first “money bomb,” a campaign fundraiser which (for Internet fundraising) raked in a record $4.3 million. Then on December 16, 2007, came the 234th anniversary of the Boston Tea Party. Paul supporters in Boston re-enacted the dumping of tea into Boston Harbor and a newcomer to politics, ophthalmologist Rand Paul, spoke at Faneuil Hall. A second money bomb set off on this commemoration of the Tea Party raised over $6 million, shattering the previous record set 41 days earlier.

What was this schism on the American Right about? It was a rebellion against the Republican Party’s wars (in particular, the twin disasters of Afghanistan and Iraq), its drunken-sailor federal spending (e.g., a $500 billion unfunded expansion of Medicare for a new prescription drug program), and its burgeoning post-9/11 federal spy and police state (for example, the Patriot Act signed into law on October 26, 2001).

By February 2009, the GOP lay in complete tatters. In addition to its endless wars and domestic spending spree, it had added a $700 billion bailout of Wall Street after the financial crisis of 2008. This in addition to a series of earlier post-9/11 outrages including a new Transportation Security Administration (TSA) in November of 2001 (by all common sense, a massive encroachment on a function each airline should have been responsible for to begin with), the so-called No Child Left Behind Act in January of 2002, and a Frankenstein consolidation of 22 executive-branch agencies into a new, gigantic Department of Homeland Security (DHS) in November of 2002.

As if all that weren’t bad enough, instead of nominating Ron Paul in 2008, the GOP had nominated conservative “war hero” John McCain and Alaska governor Sarah Palin. A war-weary public completely rejected the ticket in favor of a younger, articulate Barack Obama who promised peace and a revived economy.

The Santelli rant sprang the conservative and GOP establishments into action to transform a marketing vehicle that would serve to not only distract the public from their recent colossal policy failures, but also serve as a gold mine of self-enrichment: t-shirts, coffee mugs, bumper stickers, Taxed Enough Already (TEA) yard signs, fluff books from the conservative pundit class, Glenn Beck rallies promoted by the Fox News Channel, and Rush-Limbaugh brand iced tea and children’s books.

As Sarah Palin replaced Ron Paul as the face of the movement, a surreal change in advocacy followed. The anti-interventionist Tea Party, once outraged about the endless occupations of Afghanistan and Iraq, was now wanting the U.S. to bomb and invade Iran just as it had Iraq. Rally chants of “End the Fed” were replaced with “USA! USA! USA!” a paean to the U.S. military-industrial empire.

A Tea Party in February?

By 2014, the faux Tea Party’s fifth anniversary, it was clear that the mainstream media were firmly on board advancing the new, ersatz establishment narrative, as 2014 headlines such as “Tea Party Marks Fifth Anniversary” made clear.

Still, glaring inconsistencies remained. The grass-roots Paulist Tea Party began on December 16, 2007, the 234th anniversary of the original Sons of Liberty protest of 1773. The conservative and GOP forgery of February 19, 2009, was not connected to anything but the advancement of the self-serving and corporatist interests of Big Conservatism and the GOP. Even the latter’s supposed founder, Rick Santelli, was quickly pushed offstage while the Fox News Channel, Glenn Beck, Sean Hannity, Rush Limbaugh, and others took center stage.

Epilogue: Decentralization vs. Fighting to Gain Control of Leviathan

While the Ron Paul Revolution, from the spread of homeschooling to Austrian economics, continues on fifteen years later educating people around the world, conservatives and the GOP in late 2022 find themselves in circumstances much like those of early 2009. Unfortunately, they have no quick scam to hoodwink the public with this time around.

The Trump presidency, bereft of any consistent underlying philosophy seen so clearly in both Ron Paul presidential campaigns, promised to drain the D.C. swamp but then, in complete contradiction, worked to maintain the empire by hiring a series of crazed war hawks (including Bush-era fossil John Bolton), bombing Syria, assassinating Iranian military officer Qasem Soleimani, and creating a new wing (Space Force) of the military-industrial complex that did little more over four years of Trump’s presidency than try its best to undermine Trump at every turn. Going along with the oppressive Fauci-Birx economy-killing COVID lockdowns and other measures sealed Trump’s fate in terms of destroying his chances of re-election.

While Twitter’s spiking of the October 14, 2020, New York Post story about Hunter Biden’s laptop undoubtedly had an impact on the 2020 election, in effect it was nowhere near the daily impact of the most successful progressive and Democratic Party super PAC that ever was: the government “schools.” The conservative pundit class has zero solutions to it other than vouchers and charter schools that only serve to shift and repackage Marxist indoctrination. They cannot comprehend the idea that once government has its hands on tax revenue, it has all the leverage and spends it in a manner that best advances its interests, which is always progressive causes.

Now pundits such as Laura Ingraham are seriously proposing that the GOP’s only way to counter the Democrats is to outdo the Democrats at their ballot-and-vote-manipulation schemes. (This from the woman who championed Mitt Romney over Ron Paul in 2012, then after Romney’s defeat, proposed reviving Richard Nixon’s Southern Strategy as the new ticket to endless future GOP victories.)

A national breakup is the only way to truly save Red states from the growing pathologies in the Blue ones (high crime, taxes, onerous business-smothering red tape), but the conservative pundit class won’t go for it in a million years. As part of his legacy, Ron Paul may have persuaded them to no longer want any part of new wars such as those in Syria and Ukraine that they would have loved under George W. Bush. However, they have no intention of truly dismantling the U.S. military-industrial empire. Leave Puerto Rico and Guam? Are you kidding?! USA! USA! USA!

The Decline of Public Intellectuals

What’s Ahead for Tesla?