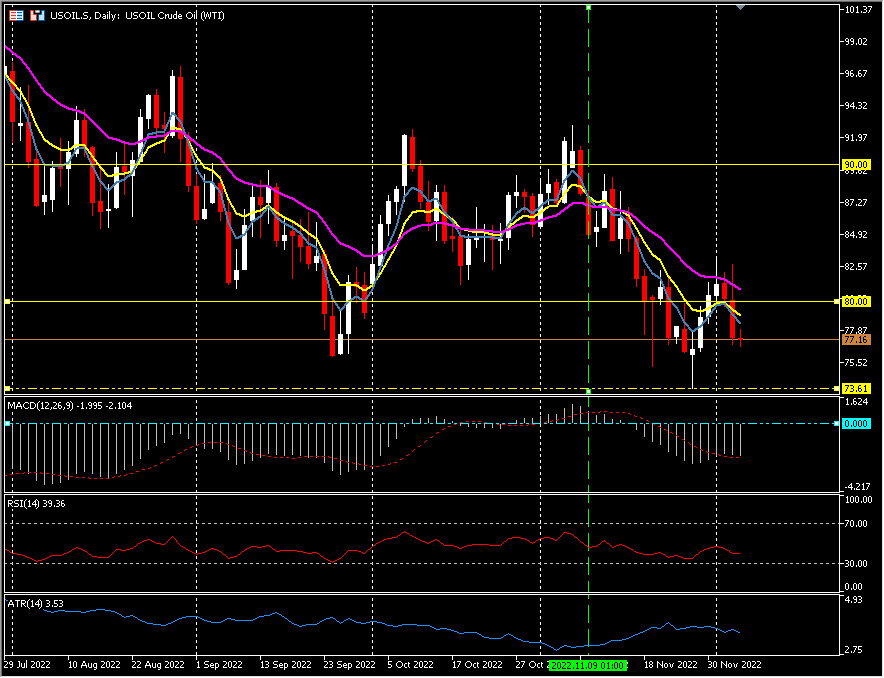 Oil prices had moved higher over the past week, with both demand and supply considerations adding support. Chinese officials over the weekend moved to ease Covid-testing rules in major cities, which helped to strengthen confidence in the economy and thus demand for oil. However, the 20-day moving average at $81.50 for USOil held and prices have declined to the $77.50 level today.

Meanwhile the G7 was finally able to sign off on the Russian oil price cap, after EU member states agreed to set the price at $60 per barrel. The G7 and Australia said in a statement that “the price cap coalition may also consider further action to ensure the effectiveness of the price cap”. The cap means participating countries will only be allowed to buy oil and petroleum products transported via sea at a price at or below $60 per barrel.

The EU’s embargo on Russian crude oil which took effect yesterday also includes a ban on the insurance for oil transports.  The last minute agreement on the $60 price cap is designed to ensure that insurers and shipping companies based in the G7 and Australia won’t accept deliveries with a higher price. This will make it more difficult for Russia to sell its oil above $60 per barrel. However, even as the price cap became public knowledge Russian oil was reportedly fetching $79.00 a barrel in Asia¹.

Participating countries hope that the move will restrict Russia’s revenues and dry out funds that could be used to finance the Ukraine war. USOil is currently trading at around $77.50 having dipped from $80 per barrel yesterday. Russia has already been selling its oil at a discounted price and against that background EU countries such as Poland had been pushing for a much lower price cap in order to deliver a real blow to Moscow’s ability to pump more money into the conflict. $60 is lower than the Commission’s proposal of around $65 but much higher than the $30 per barrel that Ukraine’s leadership had been calling for.

Meanwhile OPEC+ agreed on Sunday to make no changes to their agreement from October 5 that had slashed production quotas. That means output targets will remain unchanged until at least the end of the year. Russia, part of the alliance, said in response to the agreement on a price cap that it would not export crude to markets that are subject to the $60 ceiling. Deputy Prime Minister Novak said oil would be delivered “only to those countries that will work with us under market conditions, even if we have to reduce production a little”.

USOil continues to be capped by the 21-daily EMA and the Daily Crossing EMA Strategy  moved to another short position yesterday at close ($77.32). The Daily ATR is currently 3.67. The November end of day close low was $76.10 and the intra-day low touched $73.61, both November 28. RSI is 39.90, and the MACD remains negative. For more details on Swing Trading Strategies, join us later for our latest webinar here.