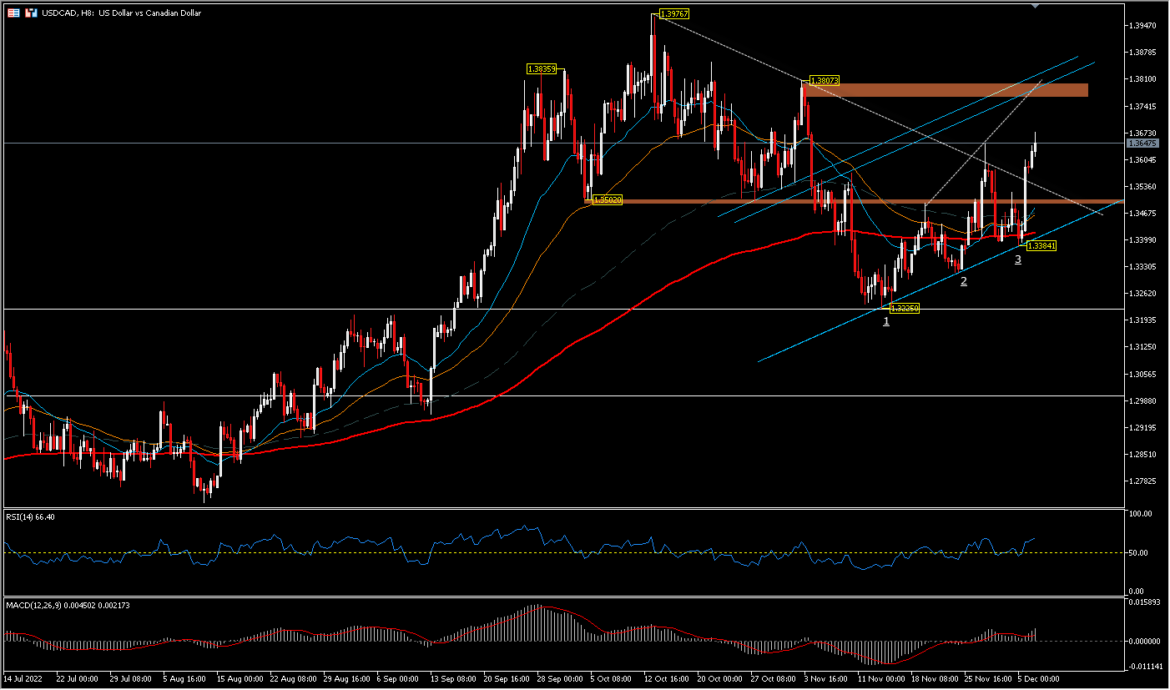 Oil Drops Hit the Loonie, Ahead of BOC Interest Rates!

The USDCAD exchange rate strengthened after a relatively hawkish Fed, which is likely to push interest rates above 5% in 2023, following a series of strong economic data from the US. On Friday, data showed that the US economy added more than 263K jobs in November, while the unemployment rate remained unchanged at 3.7%. Wages jumped 5.2% even as tech companies lost thousands of jobs. And on Monday, data showed that the non-manufacturing PMI spiked in November.

The BOC will hold its 8th and final rate setting meeting for 2022 today (December 7), a week before the Fed and ECB meetings on December 14 and 15 respectively. The rate decision will be announced at 15:00 GMT with a press conference by Governor Macklem at 16:00 GMT. This will be the biggest catalyst for the movement of USDCAD. The market predicts that the central bank will raise interest rates by 0.50% to 4.25%. This decision was taken at a time when Canadian inflation was still high. According to Statcan, the country’s annual inflation rose to 6.9% in October due to rising gasoline and mortgage prices.

Crucially, the BOC’s decision comes at a time when Canada’s yield curve has fallen to its lowest level since the 1980s. The spread between 10 and 2 year bonds rose to 100 basis points, signaling that the economy was headed for a major recession. Hence, the BOC is likely to deliver a dovish rate hike. Since the October meeting, data releases have been on the positive side. GDP growth surprisingly reversed in Q3 with an annualized rate of 2.9% q/q, while the latest inflation figures show signs of stabilizing at what could be called a very high level. Meanwhile, labor market data came in stronger than anticipated for October, but retail sales for September painted a bleaker picture.

The recent weakening of the Canadian Dollar has been distorted by the decline in world crude oil prices. Currently, USDCAD is trading at 1.3655, strengthening by 1.5% this week. The price is above the 26-day exponential moving average and is trying to catch up to the price on the resistance’s right shoulder at 1.3807. The RSI is above the 50 level, the MACD histogram is just shy of crossing the zero line. On the downside, the neckline of the head and shoulder pattern will still function as minor support at 1.3502.

Intraday bias remains neutral, while with immediate focus on the 1.3807 resistance, a strong break there would confirm the case that correction from 1.3976 has been completed at 1.3225. Further gains should be seen to the head of 1.3976. On the downside, a follow-through break of 1.3225 could see a second attempt to reverse the trend towards the 1.3000 round figure. The RSI at 66 is of course not saturated yet while MACD is still in the buy zone, trying to thwart the head and shoulder pattern that has been formed. Further movement will be influenced by the BOC interest rate decision as well as statements from Bank officials.