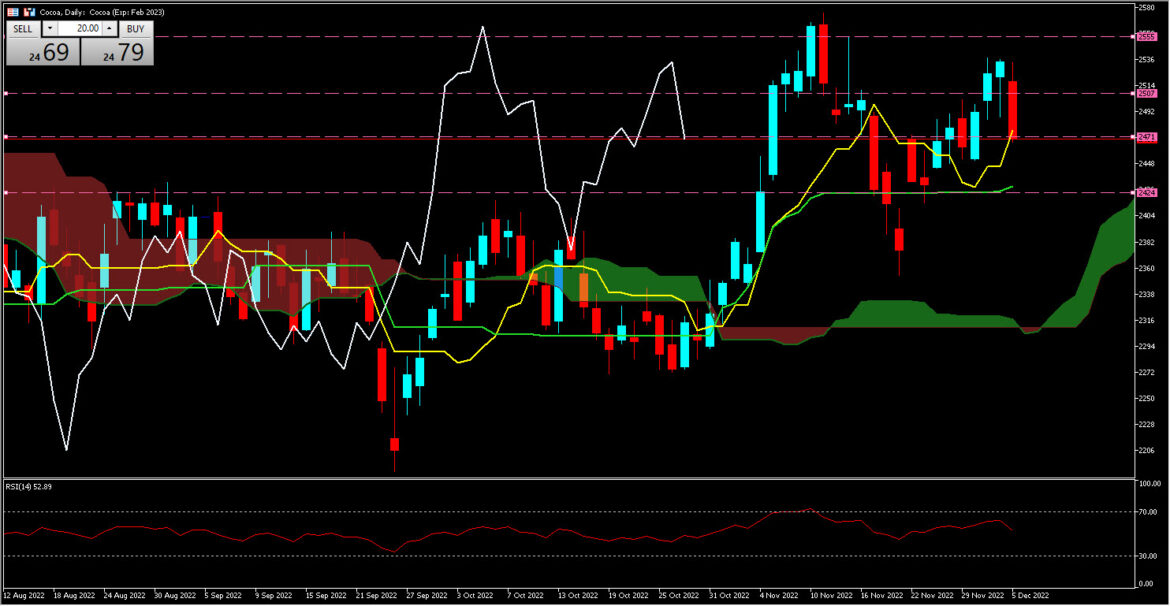 Cocoa prices in London were more affected by the strength of the Pound than by the International Cocoa Organisation’s (ICCO) announcement of a higher than expected world cocoa deficit and are currently trading at $2,469, boosted by the prospect of a large deficit. The ICCO announced on 30 November that the deficit in 2022 would be 306,000 tonnes as opposed to the 230,000 previously estimated. Production would be 4.823 million tonnes instead of the expected 4.89 million tonnes, due to lower yields caused by unfavourable weather conditions and the spread of diseases in most cocoa-producing countries. Demand was revised upwards by almost 10,000 tonnes from 5.081 million tonnes to 5.071 million tonnes. The price of Cocoa is currently above its cloud, its KIJUN (Lv) and below its Tenkan (Lj) at the level of $2469; the lagging span (Lb) is above its peers and the cloud clearly signifying a hesitation. If the price progresses it could reach $2507 then $2555. On the other hand, if the price goes back down, it could reach $2424.

ICE-certified Arabica coffee stocks stood at 605,192 bags on 1 December, up 36.7% from 382,695 bags on 3 November (the lowest level in 23 years). However, some analysts suggest that the upward trend in stocks may soon be reversed. Indeed, Brazil exported 216,443 t of green coffee in November 2022 compared to only 175,104 t in November 2021. The price of Arabica is well down due to the record crop expected in Brazil next year causing prices to fall last month (to a 16-month low) and is currently at the $163.3 level. Colombia, the world’s largest supplier of washed Arabica coffee, which is expected to produce around 12 million 60kg bags in 2022, its lowest volume for eight years due to bad weather, is concerned about the future impact of Brazil’s overproduction on prices. The country, the world’s third-largest coffee producer after Brazil and Vietnam, could start to return to normal production levels early next year when the rain subsides, according to Roberto Velez, head of the Colombian National Federation of Coffee Growers.

Robusta prices in Vietnam have remained stable compared to last week as the harvest begins to accelerate. Export volumes rose 10.2% in the first 11 months of this year from a year earlier to 1.5 t, or 25.6m 60kg bags, the General Statistics Office said. Export earnings jumped 31.5% to $3.5 billion between January and November this year. Indonesia, meanwhile, exported 32,290 tonnes of Robusta in October, up 15.6% from a year earlier, according to the local Sumatra statistics office. The price of Cotton has recovered and is currently at the $85.06 level despite fundamentals that have hardly changed with demand still amorphous, but it has been supported by the decline in the Dollar and the hope of an easing of Covid restrictions in China which will generate more sustained demand. The latest estimates from the specialist Cotlook, dated 25 November, point to an increase in global stocks in 2022/23, driven by India with an increase in production of over 48,000 tonnes, accompanied by a further reduction in global consumption of 170,000 tonnes. In China, cotton production this year is expected to increase by 5.8% year-on-year to 6.138 million tonnes, while the average delivery price of Chinese cotton is down 44.6% year-on-year, with cotton stocks expected to reach 8.467 t, up 1.8% year-on-year, according to data released by the China Cotton Association. The price of Cotton is currently at the level of $84.78 in its cloud above its KIJUN (Lv) and its Tenkan (Lj); the lagging span (Lb) is below the cloud between its peers clearly meaning a hesitation. If the price progresses, it could reach $89.89 and if this level is broken it could reach $94.73 a second time. On the other hand, if the price falls, it could reach $80.95, then $69.88.

The persistent rains in Brazil have supported the price of Sugar at the level of $19.48, hindering the harvesting operations of the cane and the loading of the second port of the country, Paranagua. Nevertheless, the country exported a total of 4.07 t of sugar in November, compared to 2.66 t in November 2021. However, traders believe that the price is unlikely to rise further, as financial market players now hold a significant long position. One US broker said: “The market could be stuck in a $19-$20 range for some time“, adding that long buying seemed limited in the future, not to mention that Brazilian mills would finish the season strongly as there is still a significant amount of sugar cane to be processed. Sugar is currently above its cloud, its KIJUN (Lv) and below its Tenkan (Lj) at the level of $19.47; the lagging span (Lb) is above its peers and the cloud clearly signifying hesitation. If the price progresses it could reach $19.91 and then $20.45. On the other hand, if the price goes back down, it could reach $18.99.