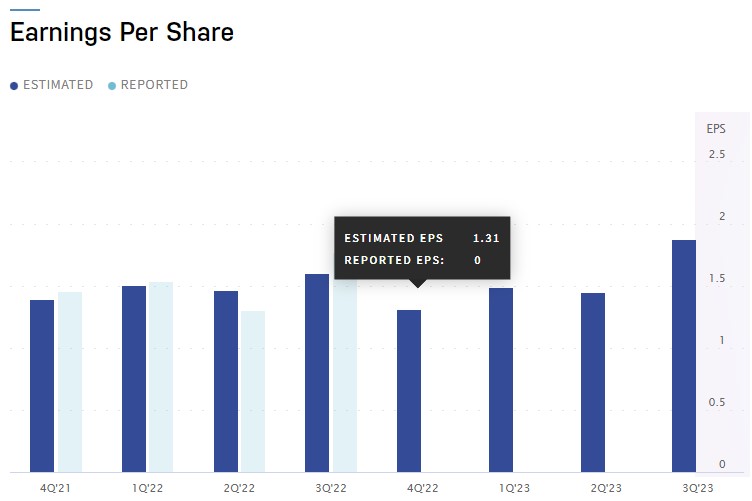 Walmart Inc., is one of the world’s largest supermarket chains, offering food, apparel, furniture, pharmaceuticals, electronics and home appliances among many other things. Walmart has a market capitalisation of $386.64B and is the fifth favourite brand behind only Microsoft, Google, Amazon, Apple and above Meta. The retail giant will release earnings results for the fiscal quarter ending October 2022 next Tuesday, November 15 before the market opens.

Walmart has the same challenges as many other companies. Inflation, which remains a major factor, continues to be in the public eye, with Thursday’s report showing that US inflation fell from 8.2% to 7.7%, a drop that could be reflected in easing consumer spending amid the economic downturn (which is favourable for omnichannel strategists like Walmart) that has engulfed the last few quarters. Although inflation declined, food and transportation rose 0.7% last month and are up 10.6% and 11.2% year-on-year respectively.

WMT has focused on increasing its e-commerce on par with its physical shops, with exclusive discounts for customers giving them the option to cut costs even while shopping at its 10,500 shops equally helping with currency fluctuations that also affect the company and the increased competition from Amazon and Target.

Operating costs continue to rise, but Walmart looks stronger than other companies thanks to its geographic clustering of shops and the fact that the company also distributes a large amount of gasoline to its customers, thus somewhat neutralising the cost of transportation with the rising price of fuel from its pumps.

The company has also focused on expanding its international operations with a presence in Canada, Chile, China, India, Mexico, Africa and Central America while operating its main supercentres along with Sam’s Clubs nationwide.

Walmart has also boosted its healthcare arm “Walmart Health” that debuted in 2019, which also includes a growing subscription service.

In other business, Walmart signed a partnership with Paramount in the shift to this quarter. Customers with Walmart+ memberships, in addition to their existing in-store, gas, InHome, grocery or music (Spotify) benefits, will also have access to a Paramount+ Essential subscription at no additional cost. This plan will give them access to a variety of popular content, from sagas like “Star Trek” to movies and children’s programming. That membership costs $98 a year and will include the Paramount+ subscription for an additional $60. Walmart has also talked to Disney and Comcast for other partnerships, according to the NYT.

Walmart+ has seen positive membership growth since its launch in September 2020. Walmart+ is estimated to average approx. 21.5 million members.

Negative data could make the price bounce off the upward channel guideline near the 38.2% at 133.81 and the 100-period D1 SMA at 132.29, and in the case that the psychological level of 130.00 is broken there could be a continuation of the downward momentum from April-May to the lows of the aforementioned channel.

Disclaimer: This material is provided as a general marketing communication for information purposes only and does not constitute an independent investment research. Nothing in this communication contains, or should be considered as containing, an investment advice or an investment recommendation or a solicitation for the purpose of buying or selling of any financial instrument. All information provided is gathered from reputable sources and any information containing an indication of past performance is not a guarantee or reliable indicator of future performance. Users acknowledge that any investment in Leveraged Products is characterized by a certain degree of uncertainty and that any investment of this nature involves a high level of risk for which the users are solely responsible and liable. We assume no liability for any loss arising from any investment made based on the information provided in this communication.

US Update – CPI & Weekly Claims – Happy reading for the FED