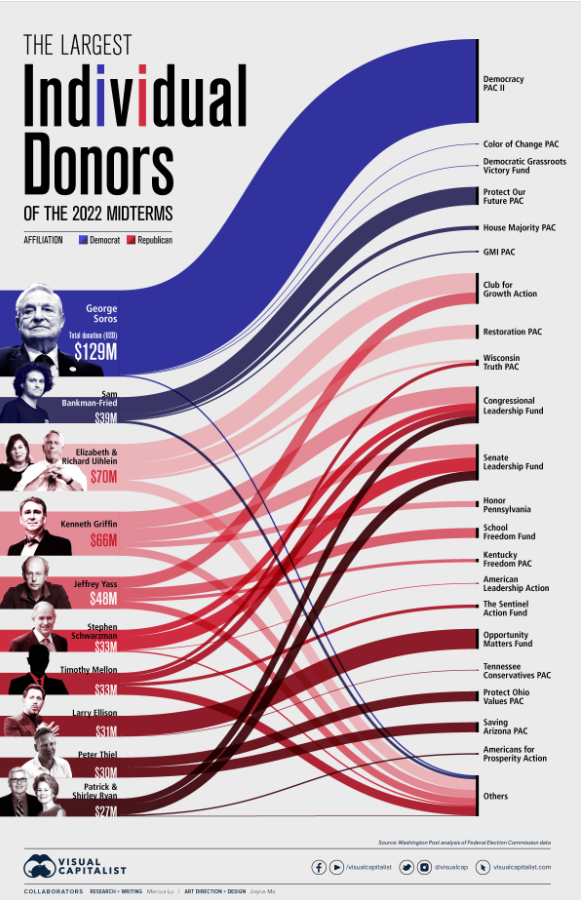 Today, November 8, Americans are called to the polls to elect the new members of the House of Representatives as well as a third of the United States Senate and according to the polls, the Republicans are likely to win around 25 seats on the 435 that counts the House of Representatives, of this fact they would obtain the majority and could also obtain the seat which they need to take the control of the Senate.

The effort of Republican donors has surely played a major role in this probable success when we know how crucial the financing of an electoral campaign is, these mid-term elections should set a new expenditure record (more than 9 billion dollars raised). Visual Capitalist¹ illustrated this data by sorting this list of the top 10 donors by party, we can see that $168 million was raised for the Democrats, and $338 million for the Republicans. Organized two years after the presidential election, these elections are crucial because they would offer the possibility of overturning the government of Joe Biden . Concretely, if the majority of the members of the Chamber turn out to be Republicans, the Democratic Party will remain powerless against the opposition and the government will fall into a cohabitation which will deprive it of legislative power. In summary, this would prevent the President from governing the country, leading to a radical change both at the political and economic level.

A deep political divide exists in the United States since Donald Trump‘s victory in the 2016 presidential elections between the Democratic Party on the one hand and the Republican Party on the other now considered “Trumpist”. President Biden declared:  “Today we face an inflection point. We know in our bones that our democracy’s at risk and we know that this is your moment to defend it,” the fact is that it is more than probable that the Republicans will pick up roughly 25 seats in the 435-seat House of Representatives, more than enough to win a majority and possibly the single seat they need to swing control of the Senate too.

A solution that seems to suit Elon Musk who calls on Americans to vote Republican in the midterm elections on Twitter : “power sharing limits the worst excesses, so I recommend voting for a Republican Congress, given that the presidency is Democrat”

The question is how will this change in policy affect the governance of the country?  Kevin McCarthy , who is expected to become the next Speaker of the House if Republicans get the upper hand in the lower house, hinted at what might happen. They plan to use ‘the federal debt ceiling’ as leverage to demand deep spending cuts; stating, “You can’t keep spending and adding to the debt…there comes a time when, okay, we’ll give you more money, but you have to change your current behavior” and adding to Punchbowl News “We’re not going to keep increasing your credit card limit, are we? And we should seriously sit down together and figure out where we can eliminate some waste?”.

During the same interview Kevin McCarthy suggested that he would try to reduce US aid to Ukraine : “I think people are going to be sitting in a recession and they’re not going to write a blank check to Ukraine. They just won’t…”. It’s not a free blank check” and to add “And then there are the things that the Biden administration does not do at a national level. It doesn’t care about our border and people are starting to take that into account. Ukraine is important, but at the same time it can’t be the only thing they do, and it can’t be a blank cheque.”

At the same time, if Republicans take control of the House , it will likely be dissolved, while other committees will pass into Republican hands. Several Republican lawmakers have called for the impeachment of Biden , Attorney General Merrick Garland and Homeland Security Secretary Alejandro Mayorkas . Asked by CNN this week whether impeachment was “on the table,” McCarthy replied, “You know what’s on the table? Accountability”, before listing a list of possible investigations and adding “We will never use impeachment for political purposes”; “it does not mean that if something rises on occasion, it would not be used”. In addition, they would work to make personal tax cuts permanent as well as protect the corporate tax cuts that Democrats have been trying to eliminate over the past two years.

From an economic perspective, investors seem to be leaning towards a Republican victory, but regardless of who wins, the past midterm elections provided a period of positive market performance , which those concerned would rejoice after. a year in which the S&P 500 fell nearly 21%. Here are some areas of the stock market that will be targeted when Americans go to the polls.²

Defense spending is expected to increase regardless of the outcome , due to tensions ( Ukraine & Taiwan ). But a Republican victory would allow for a “significant” increase in spending, according to UBS Global Wealth Management , versus a “moderate” increase if the Democrats retain one or two houses of Congress. The S&P 500 Aerospace & Defense Index ( .SPLRCAED ) is up nearly 10% this year.

Pharmaceutical and biotech stocks should benefit from a Republican victory, after Democrats recently repealed a law aimed at reducing prescription drug prices. The S&P 500 healthcare sector ( .SPXHC ) is down nearly 7% in 2022, while the S&P 500 pharmaceuticals index ( .SPLRCCARG ) is up about 1%.

According to Citi analysts , it is not certain that the reform of GAFAM enjoys bipartisan support . In fact, a Republican victory in the House or Senate “probably signifies legislative paralysis, which implies incremental improvement in the category,” they said. The Nasdaq 100 Index ( .NDX ) has fallen by about a third this year.

Energy stocks have had a bumper year and stand to benefit from a Republican win , with the S&P 500 ( .SPNY ) energy sector up more than 60% in 2022, Citi analysts said , although such a policy may be favorable to oil exploration companies, it could weigh on stocks by putting pressure on oil prices.

A surprise Democratic victory could lift the sector . The Invesco Solar ETF ( TAN.P ) has fallen about 6% this year. Legislation promoting “clean energy,” including tax credits and investments, could benefit from this status quo according to State Street Global Advisors.

A Republican Congress would make border security a ” high-profile issue” according to Strategas. While private prisons such as CoreCivic are up about 12% this year, and Geo Group is up about 15%. Evidence is offered to us as inflation undermines the notoriety of President Biden   “Trumpism” is still very much alive and ingrained deeply in American society, in a speech this Monday in Dayton (Ohio), former President Donald Trump promised he was going to make “a really big announcement” on Nov. 15 at Mar-A-Lago, his Florida residence. This statement flirts with the idea of ​​a new candidacy for the White House.

Disclaimer: This material is provided for marketing informational purposes only and does not constitute independent investment research. The content of this publication should not be considered investment advice, an investment recommendation or a solicitation to buy or sell any financial instrument. All information provided is collected from reputable sources together with data containing an indication of past performance and should not be taken as a guarantee or reliable indicator of future performance. Users acknowledge that any investment in FX and CFDs products is characterized by a degree of uncertainty and that any investment of this nature involves a high level of risk for which users are fully responsible. We accept no liability for any loss resulting from any investment made on the basis of the information provided in this publication. This publication may not be reproduced or distributed without our prior written permission.